Show/Hide
For up-to-date information about the Coronavirus in the Amarillo area, please visit www.amarillopublichealth.org.

Amarillo Public Library, the Library Advisory Board, and Friends of the Amarillo Public Library stand with libraries all over the country to condemn racism and to express solidarity with black people and all people of color.  Please see statements issued by our professional organizations, the American Library Association and Texas Library Association, as well as a statement from the Texas State Librarian:

Nationwide protests, including in the City of Amarillo, since the death of George Floyd have led to a marked increase in reading antiracist books.  Our collection also reflects that increased interest.  Many of our books like How to Be an Antiracist by Ibram X. Kendi and The New Jim Crow by Michelle Alexander are checked out and have multiple holds.  Across the country it has actually become difficult to obtain print copies of these books because they are sold out.

Thanks to support from the Friends of the Amarillo Public Library, we are increasing our collection of downloadable ebooks and audiobooks, as well as adding titles to our DVD collection.  The new ebook and audiobook titles are now available for checkout through the 3M Cloud Library on our website and can be easily located on a Black Lives Matter bookshelf at the top of the page.  The new DVD titles should be available for checkout by the end of June.

In the meantime, diversity within our collection has always been a pillar of our mission to educate and enlighten, so we are sharing this list of available resources here.  It is not exhaustive, but is a good place to start for people wishing to educate themselves about the problems of racial inequality embedded in our society.  Keep reading after the list for more online resources and ways to get involved.

America's Original Sin: Racism, White Privilege, and the Bridge to a New America by Jim Wallis

Between the World and Me by Ta-Nehisi Coates

A Black Women's History of the United States by Daina Ramey Berry and Kali N. Gross

Blood at the Root: A Racial Cleansing in America by Patrick Phillips

The Color of Law: A Forgotten History of How our Government Segregated America by Richard Rothstein

The Fire This Time: A New Generation Speaks About Race by Jesmyn Ward

The Grace of Silence: A Family Memoir by Michele Norris

Have Black Lives Ever Mattered? by Mumia Abu-Jamal

How to Be an Antiracist by Ibram X. Kendi

I Can't Breathe: A Killing on Bay Street by Matt Taibbi

Just Mercy:  A Story of Justice and Redemption by Bryan Stevenson

Men We Reaped: A Memoir by Jesmyn Ward

Rising Out of Hatred: The Awakening of a Former White Nationalist by Eli Saslow

Separate: The Story of Plessy v. Ferguson, and America's Journey from Slavery to Segregation by Steve Luxenberg

So You Want to Talk About Race by Ijeoma Oluo

Stamped from the Beginning: The Definitive History of Racist Ideas in American by Ibram X. Kendi

Tears We Cannot Stop: A Sermon to White America by Michael Eric Dyson

They Can't Kill Us All: Ferguson, Baltimore, and A New Era in America's Racial Justice Movement by Wesley Lowery

We Live for the We: The Political Power of Black Motherhood by Dani McClain

When They Call You a Terrorist: A Black Lives Matter Memoir by Patrisse Khan-Cullors

White Fragility:  Why it’s so Hard for White People to Talk about Racism by Robin J. DiAngelo

White Rage: The Unspoken Truth of Our Racial Divide by Carol Anderson

Anger is a Gift by Mark Oshiro

The Hate U Give by Angie Thomas

How It Went Down by Kekla Magoon

I Am Alfonso Jones by Tony Medina

Just Mercy:  A True Story of the Fight for Justice—Adapted for Young Adults by Bryan Stevenson

Long Way Down by Jason Alexander

On the Come Up by Angie Thomas

Piecing Me Together by Renée Watson

Your Black Friend by Ben Passmore

A Good Kind of Trouble by Lisa Moore Ramee

Hip Hop Speaks to Children: A Celebration of Poetry With a Beat edited by Nikki Giovanni

Midnight Without a Moon by Linda Williams Jackson

One Crazy Summer by Rita Williams-Garcia

Only Black Girls in Town by Brandy Colbert

The Parker Inheritance by Varian Johnson

Roll of Thunder, Hear My Cry by Mildred D. Taylor

The Undefeated by Kwame Alexander and Kadir Nelson

Crown: An Ode to the Fresh Cut by Derrick D. Barnes

Hair Love by Matthew A. Cherry

I Am Brave: A Little Book About Martin Luther King, Jr by Brad Meltzer

I Love My Hair by Natasha Tarpley

Mahalia Jackson:  Walking with Kings and Queens by Nina Nolan

Martin and Mahalia:  His Words, Her Song by Andrea Davis Pinkney

Of Thee I Sing: A Letter to My Daughters by Barack Obama

The People Could Fly: The Picture Book by Virginia Hamilton

The Power of Her Pen: The Story of Groundbreaking Journalist Ethel L. Payne by Lesa Ransome-Cine

We March by Shaun Evans

Do the Right Thing

The Hate U Give

If Beale Street Could Talk

I Am Not Your Negro

In the Heat of the Night

Lilies of the Field

A Raisin in the Sun

The Smithsonian’s National Museum of African American History and Culture has launched Talking About Race, an online portal designed to help individuals, families, and communities talk about racism, racial identity, and the way these forces shape every aspect of society, from the economy and politics to the broader American culture.

Anti-bias Education - A Selection of Children's Books for Each Topic

A list of children's picture books that have been selected as companions to each of the chapters in the new Anti-bias Education book.

Oakland Public Library – Talking to Kids about Racism and Justice

A list for parents, caregivers, and educators of titles, digital resources, and videos compiled by the Oakland Public Library system.

We Need Diverse Books™ is a grassroots organization of children’s book lovers that advocates essential changes in the publishing industry to produce and promote literature that reflects and honors the lives of all young people.

"The Other America" – A Speech by Rev. Martin Luther King, Jr.

The text of Rev. Martin Luther King Jr.'s speech at Grosse Pointe High on March 14, 1968, just weeks before he was assassinated in 1968.

The mission of the National Association for the Advancement of Colored People is to ensure the political, educational, social, and economic equality of rights of all persons and to eliminate racial hatred and racial discrimination.  The local branch’s Facebook page can be found here.

An offshoot of the Black Lives Matter movement, Campaign Zero’s agenda is ending police violence by focusing on research and policy solutions for elected representatives.

Showing Up for Racial Justice

SURJ is a national network of groups and individuals organizing white people for racial justice.

For 21 days, do one action to further your understanding of power, privilege, supremacy, oppression, and equity.  The plan is adaptable and includes suggestions for readings, podcasts, videos, observations, and ways to form and deepen community connections. 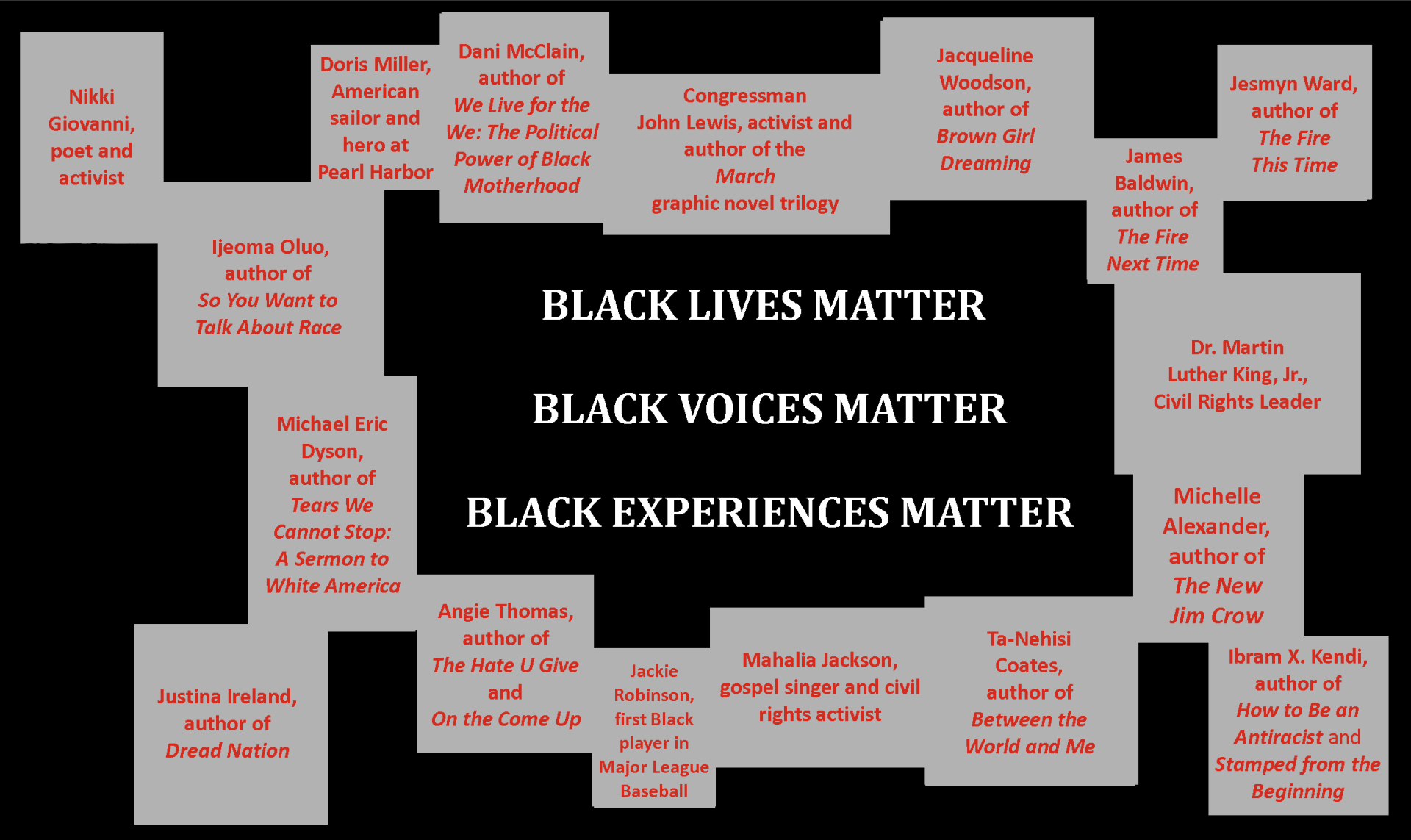